Discreet Interventions is proud to be featured in publications, online, and during television and radio interviews. To learn more about our expertise, Call 617.650.5423 for more information.

(WHDH) — Heroin hidden in a sandwich. Four bags of heroin found in a fake soda bottle. Ecstasy — inside a fake water bottle. And even more heroin buried in a battery. All drug discoveries made by Tom Robichaud and his dog.

“I just look at the kid and shake my head… ” says Robichaud. “What? You think you’re going to fool a dog?”

Robichaud offers a private drug sniffing dog business. If a parent suspects their child is using drugs, they can call Robichaud. He and his dog will then come to the house and sniff out any trace of drugs without calling police.

“I don’t go into the house with drugs,” says Robichaud. “I don’t leave with drugs.”

He and his business partner Jeff Oteri call the method “Discreet Intervention.”

“I’m there to search your home and tell you, yes there’s drugs there, no there’s not drugs there.” says Oteri.

If the dog does find drugs – the family decides what happens next. “What you do is up up to you” concludes Oteri.

A dog trainer for about 30 years, Robichaud, 55, has run Discreet Interventions, a private drug dog search service aimed at helping families deal with drug addiction without the intervention of law enforcement. He also performs searches for private industry. 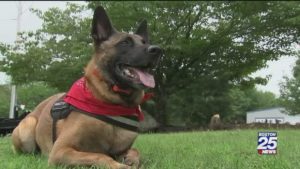 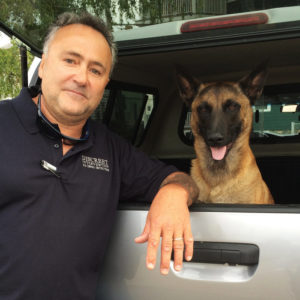 Tom Robichaud and one of his trainees, Ben.
Tovia Smith/NPR 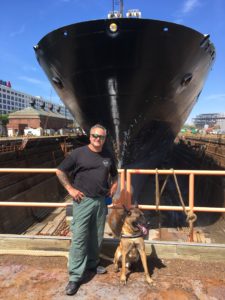 Tom and his dog Ben are trained to find weed, but their main focus these days is the stuff causing overdoses. 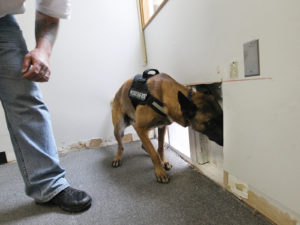